I got a desperate phone call from Konani, a town where I have a water project.

“It broke! The system isn’t working, we can’t pump water to the houses! Can you come and help?”

After getting more details, I politely declined. Truth is, I could have arrived the following day with my voltmeter and tracked down the problem. It would be either electrical or a failed pump, because a few months earlier our tests showed the well itself is healthy. I could have quickly identified the problem component, contracted a technician if needed, and found money for the solution.

Instead, I told them, “The project money is not for routine maintenance; that is the responsibility of the community.” I know they have the capability of replacing a pump on their own- they’ve done it before. I suggested they find out how the previous administrators paid for the last pump and who installed it (putting into practice community resilience theory: how did they overcome problems in the past?). With that, I ended the conversation.

Now, if it had been a matter of life-and-death, I would have tried to help ASAP; but this town has a second water well. Families with dry taps will just have to walk a couple blocks to get water until repairs are finished.  Maintenance is the most important part of a water system, and that’s why I shouldn’t do it. I’m not in the community long-term. If outsiders jump in to fix every maintenance problem, the community will never become self-sufficient. They need to see that I won’t post an emergency blog post asking my readers to donate towards a new pump; rather, the water administrators need to collect enough money, monthly, from system users to save for big things like a new pump.

Slowly but surely, the local leaders have made progress. They tracked down the technician who replaced the pump 13 years ago. They’ve figured out how they will get most of the money for a new pump.

And YESTERDAY the technician brought his equipment to Konani, took out the old pump, and tested and diagnosed it! The waiting has been worth it for me, because people in the community are taking the lead. And in the future, they will now be better equipped to deal with this the next time it comes up. And hopefully they’ve been reminded to collect a couple extra cents from the families for a cushion fund. 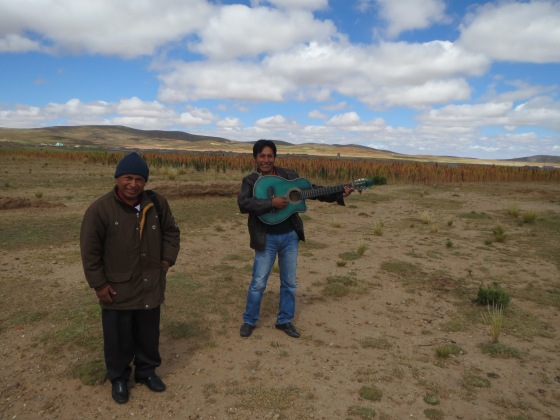 Julian Calle and the pastor Justo Catacora. Along with Feliciano Fabrica (not pictured), they are responsible for yesterday’s achievement of hiring a technician to come to Konani. Picture from March, with quinoa fields in bloom in the background.

I’ve played a supporting role. I saved them money by explaining that they don’t need to have the technician rehabilitate the well. I cross-checked with other companies to make sure they are getting a fair price. I’m helping identify a new, reliable pump that is 50% more powerful: they can sustainably pump water out at a faster rate because the water flows in so quickly from the aquifer. And to show that this slight increase in capital cost is worth it, in order to provide much more water, we will contribute a small amount of money from the project fund.

It may be slow progress, but I think it qualifies for the much overused s-word: “sustainable”. I don’t know about you, but whenever I want to make a change in my life (eat healthy, time management, etc.), slow change is the kind that sticks. I can drastically change and eat mostly veggies for a day or two, but who am I kidding- that’s not sustainable for a sweet tooth like me. Rather, each year I try to eat more good things and less bad things. It’s almost imperceptible change.

Communities are often the same. Small changes are gradually woven into the fabric of life. Any big or seemingly sudden project work, in order to have long-term impact, is connected to years of patient preparation and years of follow-up.